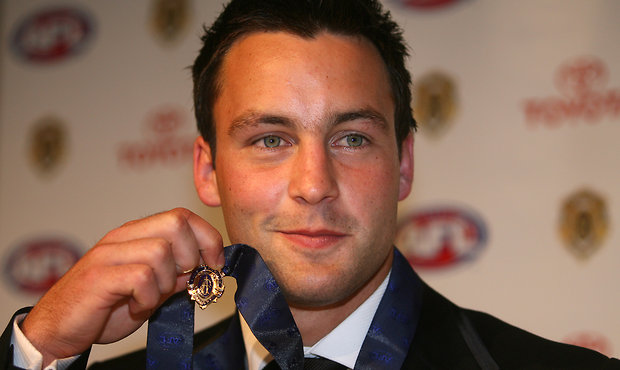 And while the trio of Ablett-Carey-Matthews won 13 club best and fairests between them, the trio of Woewodin-Wynd-Hardie won just three.

Generally speaking, club best and fairests are a better indication of where a player stands in the “he wasn’t half bad” stakes.

But sometimes even those don’t quite add up.

The following list won 12 Brownlow Medals between them and exactly zero club best and fairests.

Yep. Zilch. Nada. Nought. Cloke’s chances of dobbing one from 15m out on a slight angle. Null. Diddly-squat. You get the picture.

POTENTIALLY the most shocking in this list, the milestone man has never snagged a best and fairest for the Cats.

Rated third by us here at The Hickey Stand to only Gary Ablett Jr and Matthew Scarlett as the greatest Cat during the three-flag era, Bartel is a victim of the blokes around him being pretty bloody handy too.

In his Brownlow year, Ablett was voted the best player of the season in-house. On either side of that year it was Joel Corey and Paul Chapman. In years close by it was names like Cameron Ling, Corey Enright, Joel Selwood, Scarlett and Tom Hawkins.

Great players but still…Jimmy was robbed.

AS WELL as having a casually racist nickname, Carji Greeves is known for winning the first Brownlow ever and for having the Cats best and fairest named after him.

Funnily enough though, Carji never won a Geelong best and fairest himself.

In the year he won the Brownlow (1924), the Cats didn’t award a best and fairest and wouldn’t do so for another three seasons.

The award was then snagged by Jocka Todd, before the founding father of this very website, Reg Hickey, won the first of his many awards in 1928.

It beggars belief that Quinlan was never considered the best player in his team, particularly given he played for Footscray and Fitzroy, two perennial strugglers.

Even when he kicked 116 and 105 goals respectively in 1983 and 1984, he lost out to Matt Rendell and Ross Thornton for the highest club honour.

You can always rely on Fitzroy to get things completely arse-up.

ANOTHER victim of the bunch of talented blokes around him, Dipper lost out to names like Dunstall, Platten, Ayres and Brereton.

But he showed them. None of them had the sort of relationship he had with Dimmeys & Forges.

A club best and fairest or an ongoing commercial relationship with a bargin bin store? I know what I’d choose.

WHEN he wasn’t ripping out far out groovy tunes with The Beach Boys, Brian Wilson was winning a Brownlow Medal for Melbourne in 1982.

But he wasn’t winning best and fairests.

Snagging the Brownlow at his third club, Wilson was the youngest bloke to win the Chas since Bob Skilton in 1959.

To be fair though, Wilson falls more into the Woewodin category of Brownlow Medallists than the Skilton category.

LET’S be honest, the best thing about Cooney winning the Brownlow in 2008 was him kissing Gary Ablett’s bald bonce the following year.

The only No.1 draft pick to ever win a Brownlow, Cooney lost out to Daniel Cross for the Bulldogs best and fairest in his Charlie year, before Matthew Boyd and Ryan Griffen waxed the award for the five seasons.

YOU’VE probably never heard of the “Fred Goldsmith Curse”. Mostly because we just made it up.

But Goldsmith was the first and only specialist full-back to ever win the Brownlow, condemning guys like David Dench, Stephen Silvagni and Matthew Scarlett to Brownlow irrelevance.

His 1955 season wasn’t highly rated at the Swans either, with ruckman Ian Gillett winning that year’s best and fairest.

EACH of these blokes have their own interesting story.

Ivor Warne-Smith won two Brownlows and celebrated by fighting in BOTH the world wars.

Wilfred Smallhorn only fought in one world war, but survived Changi prison by creating the Changi Football League.

Stan Judkins won the Brownlow outright after he had tied with Allan Hopkins and Harry Collier, but the league decided the player who had played the least games that season deserved the medal – which only happened because Judkins had been dropped by the Tigers late in the season.

And Denis Ryan was forced out of the game for good after being wounded at Tobruk.

What they all have in common is that they won the Brownlow in years that their clubs have no record of awarding a best and fairest.

Ryan and Smallhorn’s Fitzroy team only awarded a B&F twice from 1930 to 1942 (both to Haydn Bunton), while Melbourne went from their foundation year of 1897 all the way to 1934 without an award, with Warne-Smith’s best years coming in the late-20s and early-30s.

Judkins’ Tigers, however, have only skipped seven best and fairests in their 118 year history, with 1930 being one of those – the year Stan won the Brownlow.

Published by The Hickey Stand