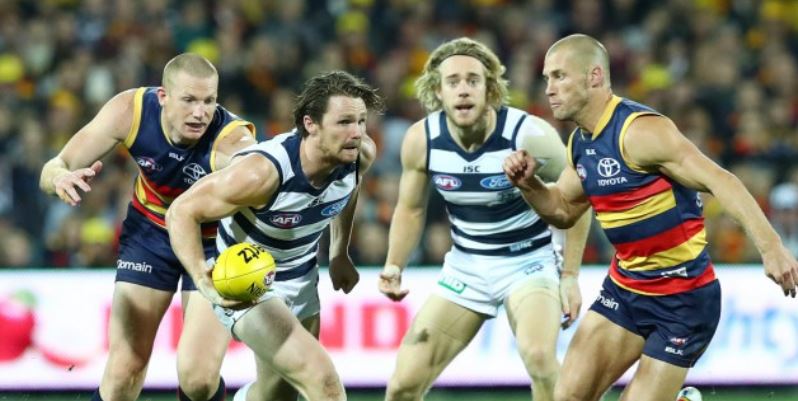 Sorry Power fans, sorry Blues fans, sorry Demons fans – you’re all going to experience the odd high every now and then this season, but your finals chances are about as good as Aaron Hall winning the Brownlow.

It might have looked possible early on, but it was never going to happen.

So which teams do we want to see on Grand Final day? Which teams do the AFL want there? Which washed-up rock star will embarrass themselves in the pre-match entertainment? What is Phil Collins up to these days? Let’s investigate.

Why the AFL wants it: The best two Victorian teams of the past decade in a The Mountain v The Red Viper-style fight to the death. It’s the only way another Hawthorn Grand Final can be made interesting.

Why Hawks supporters want it: A chance to be just the second team in VFL/AFL history to win four flags in a row. Rubbing it in the faces of the Geelong faithful is the icing on the cake. And beating a Victorian team at the MCG – instead of the interstaters they’ve knocked off so far – makes the icing even sweeter.

Why Cats supporters want it: So they can die happy. It’s rich saying Geelong supporters are unsatisfied given those three premierships in five years, but beating Hawthorn when it matters is the Holy Grail.

Why the AFL wants it: Aussie Rules is the flavour of the week in the Harbour City. With an all-Sydney Grand Final, that interest might last at least another two seasons. Or at least until NSW becomes relevant in Origin again.

Why Swans supporters want it: To keep that bandwagon rolling. There’s nothing quite like going to the footy on a chilly Saturday night and watching the Swans win. Watching them lose though? Pfft. We could’ve been sipping espresso martinis at Darling Harbour instead of watching this rot.

Why Giants supporters want it: We’ll ask him when we see him.

The pre-match entertainment: Nikki Webster. To revisit the last time Sydney was truly relevant in the Australian sporting scene.

Why the AFL wants it: 62 years is the life expectancy in South Africa. It’s also the last time the Bulldogs won a premiership. Anyone with half a semblance of a soul in the AFL would love to see the Doggies break that drought.

Why Bulldogs supporters want it: 55 years is the life expectancy in Somalia. And it’s also the last time the Bulldogs were in a Grand Final. They’ve been in 7 preliminary finals along the way without making the big dance. Doggie supporters deserve to dance.

Why the other supporters want to play the Dogs: They don’t really. I mean, given the choice of not playing in a Grand Final at all or playing the Doggies the choice is obvious. But no one really wants to be the villain that denies Footscray a premiership.

The pre-match entertainment: A Frank Sinatra tribute act to sing his smash hit Three Coins in the Fountain, the number one song on the Australian charts on September 25, 1954.

Why the AFL wants it: A relatively new rivalry, recent games between the Dogs and the Crows have been exciting, fast-paced and – unlike the last two Grand Finals – close. We’re in desperate need of a Grand Final that’s decided by less than 10 points. These two could provide us with our Johnathan Thurston golden point moment.

Why Bulldogs supporters want it: See above. Also, revenge for being robbed in the 1997 preliminary final, a year in which the Crows won the flag on the back of two games worth of dubious umpiring decisions.

Why Crows supporters want it: Of the other teams that will make the finals, the Crows have the second-longest drought behind the Bulldogs, having not won since 1998. Sure, it’s 1/3 as long as the Doggies’ drought, but there’s sweet fuck all to celebrate in Adelaide. They need a distraction from their awful lives.

The pre-match entertainment: To revisit our earlier question, what is Phil Collins doing these days? According to his wiki page: “In October 2015, he announced that he was no longer officially retired and is planning to tour and write a new album.” Sounds to us like a perfect Grand Final performance opportunity. We can feel it in the air.

Why Crows fans want it: So they can prove once and for all that Dangerfield isn’t that good and they were always going to be better off without him.

Why Cats fans want it: So they can prove once and for all that Dangerfield is that good and they were always going to be better off with him.

The pre-match entertainment: A head-to-head debate between Crows and Cats fans from BigFooty.

Published by The Hickey Stand